The Health Report on ABC’s Radio National station is a great resource for anyone interested in current health and medical issues. A recent program (April 8 2013) focussed on approaches to the treatment of low back pain.

The first segment discussed “Cognitive Functional Therapy” as described by Professor Peter O’Sullivan from the Department of Physiology at Curtin University in W.A. He described the development of a cascading cycle of pain and disability that commonly arises after an initial injury or trauma event which results in severe pain: Pain is scary and the body’s automatic response to it is to protect the body from further damage and pain by limiting or avoiding certain types of movement and behaviour.

In the short term this is adaptive. However if these protective habits are maintained in the longer term, these same protective habits can become entrenched in the way the person moves and thinks about their pain. The anticipation of future pain and the avoidance of movements which the individual speculates may lead on to pain episodes results in increased body tension and avoidance of a whole range of behaviours that may NOT cause pain, or may even help to relieve it - however because they are avoided, these outcomes are not discovered.

After taking a detailed history of the person’s pain background, including what advice they have previously received, their beliefs, their fears and things that they avoid, an analysis is conducted of the individual’s habits of movement and posture and the strategies of movement that they use.

The main elements of treatment in CFT involve:

Starting with less provocative postures and movements enables patients to relax and gradually regain movement. Slowly the process builds confidence and works toward helping individual’s undertake the very movements that they are most frightened to do. According to Professor O’Sullivan, when the individual can feel that the feared movement does NOT harm them (and may actually be helpful) then this leads to changes in their beliefs about their back and its resilience. So helping individuals to change their behaviours in relation to pain also helps them change their beliefs about pain. In turn, this leads to a significant reduction in the pain reported by many patients.

To test the effectiveness of this approach Professor O’Sullivan was involved in running a research trial in Norway that randomly allocated patients who suffered from chronic back pain to either a treatment group receiving traditional treatment (combining manual therapy, manipulative therapy and some exercise) or to a second treatment group which received treatment based on the CFT approach referred to above. Both groups received treatment across a 3 month period. At 12 month follow up both groups showed improvement. However the CF group showed clinically and statistically significant improvements across a wide range of measures including reduction of disability, pain levels, pain episodes, beliefs about their back, less fearful about movement, less fearful of working with pain, less time off work due to pain, and reduced care seeking.

The second segment of this program considered the usefulness of MRI and CT scans in diagnosing back problems. It pointed out that these extraordinarily sensitive tests often reveal “abnormalities” (eg herniated, bulging or degenerated discs) in a large proportion of cases, even in people who do not suffer from any back pain.

However it seems that where such abnormalities are found, there is a tendency for both doctors and patients to then attribute pain to this source and not consider other possibilities. This might then lead on to inappropriate or unnecessary(and costly) treatments. In fact there is evidence that in areas of the US where more scans of the back are routinely undertaken, rates of surgical intervention are higher.

In another recent study, MRI scans were done on a large group of patients with chronic back problems. Half the patients, randomly assigned, were given the results of the scan and the other half were not. At follow up it was found that the patients who did NOT get the MRI results reported better improvements than the group who were given access to the scans. It seems that seeing an image from a scan is more impactful than reports given verbally or in writing. Again the implication is that this may influence patients’ willingness to undergo more radical forms of treatment such as surgery for back pain rather than consider alternatives such as Cognitive Functional Therapy..... Or yoga?

Many listeners to this Health Report program noted that the CFT approach advocated by Professor O’Sullivan was not new and in fact was following well established treatment principles long practiced within yogic and Feldenkrais circles. The importance is that mainstream medical research is beginning to carry out evidence based research to more fully investigate and understand the effectiveness of approaches which practitioners of yoga and Feldenkrais have been using for centuries. 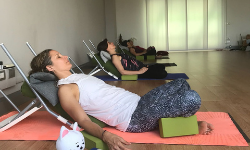