Greetings from Phuket (on my way home from India)

Not having easy access to media or internet, I've been very out of touch with the catastrophic events back home. As I write now I feel a lot of sadness for the enormity of loss that has been experienced. I expect if you've not had personal loss you will know someone that has and having now seen some of the images, I feel very much for those that have lost so much. I'm also touched by the generous spirit in which people have united to help each other out.

Personally friends (our new yogaphysio Saint Sonja and her lovely family!) and family have spent a lot of time moving valuables and sandbagging YP against rising waters. I look forward to returning and offering similar support where the opportunity arises. When YP is up and running, one thing I can surely offer, is that anyone effected by flooding and needing some time out can come along free to any of my classes or just join me for a quiet cuppa. Although I appreciate this my not be the priority it's an easy thing for me to give.

Anyway the little article below I wrote when I was in India; I hope it gives you something. I've also attached the new timetable. Read very carefully as there are some changes and many new classes. Saint Sonja will commence 2 new beg/yogaphysio; we welcome Micki to Sat morning and Tanya to teach belly dancing mid week, a new level 2 Thurs early am and a Sunday evening general with me.

After the success of Rob's beautiful kirtan, we will continue this on the last Friday in Jan and every month.

I arrived safely in India and was picked up by Swami Mangalananda on his motor bike. It was Sunday afternoon and I came to the Indore ashram amid the excitement of a bhajan (chanting session) of around 100 people. Met up also with some old and new western friends that visit the ashram. Caught a glimpse of radiant Baba (Swami Kedarnath), who has set up the Indore and Omkareshwar ashrams in reverence of Anandamayi Ma.

Now I am 5 days or so, staying at the Ashram in Omareshwar. An ashram is a little like a monastery, but not so quiet. The ashram is not quiet because there are still many devotional rituals that take place pre-dawn and in the evening. These practices don't always require outer silence, but engage ritual as a gateway to understanding mind. By the look of bliss on some of the boys faces during their workship though I have no doubt they have some inner silence.

Omkareshwar is a pilgramage place and so there are many temples and ashrams vocally conducting their worship to awaken one at around 5am. The ashrams rests on the bank of the beautiful Narmade river. Generally a place for spiritual practice; Ma's ashram is open to all sincere spiritual practitioners irrespective of religion or practice. The simplest of Ma's teaching was that we are all divine and this means we are all equal and due the utmost love and respect from each other.

Before I left some of you asked whether christmas would be celebrated and infact it was. There was a devotional service (indian style) conducted to Jesus. There was also a christian man from Sri Lanka, staying to teach english in the school and he read from the bible. American Swami Mangalananda translated into hindi.

There are a number of foreigners staying in the ashram involved in many practices, such as meditation and 'seva' service (just helping out). My days are spent meditating, doing some yoga asana and reading and washing clothes.

Nice and simple. It is a nice place to just be.

Anandamayi Ma was a female saint who died in 1982. There are more than 30 ashrams around India devoted to her. The one I stay in was set up by Swami Kedarnath (a great saint himself). Ma's teachings to different individuals varied according to the person and there faith; but basically she taught that all is divine. 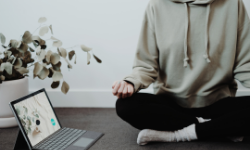